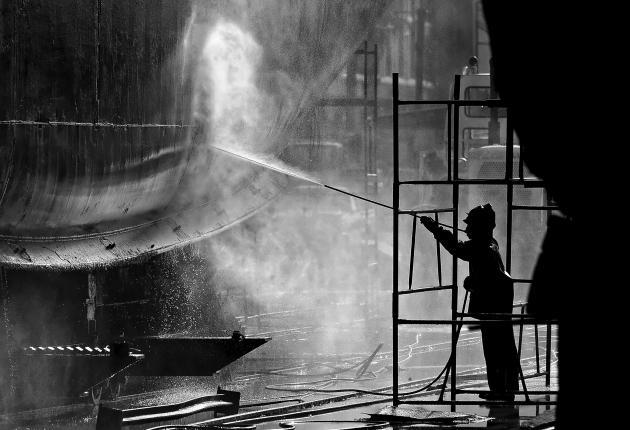 Some say that cleaning is an art; ranging from those who never clean to others who make it an obsession. Whether it involves cleaning the great works of human engineering or modest homes, clearing endless forests or cleaning skyscraper windows; cleaning is an imperative that manifests itself in various forms, combining tradition, innovation and culture. At Helpling, we deal with household cleaning, one of its most common and known forms. We decided to collect images that tell the stories of all those cleaning practices that take place outside the boundaries of the domestic space. Keeping ship exteriors clean is a fundamental practice in the shipping industry and if neglected, the consequences have a strong economic and environmental impact. The mud and dirt that form on the hull of any type of container ships significantly increase the resistance, reducing the performance and resulting in higher fuel consumption and a greater emission of greenhouse gases. The oldest steam locomotive in Europe dates back to 1883. The outer parts are usually washed with machinery similar to those employed for washing cars. For the interior, you use steam generators able to sanitize with little consumption and without damaging the environment. The unstoppable growth of the vertical metropolis has seen a proliferation in recent years. With over hundreds of construction plans for more futuristic buildings and glass skyscrapers as they continue to be confirmed as architectural icons, they all need to be cleaned regularly.

Window washers in cities like New York or Dubai have a job like no other, requiring precision and courage. The Burj Khalifa in Dubai, for example, with its 160 floors is the tallest skyscraper in the world, reaching a height of over 800 meters and to clean its 24,000 windows takes an intrepid team of window washers three entire months.

Some skyscrapers require great care and special products. The windows of several skyscrapers in New York, for example, are cleaned with hydraulic mechanisms that cost more than $3 million and require years of planning. Ever wonder when you go skiing how the tracks are clean and tidy the next morning waiting to be used again? This is the work of piste-basher drivers who go out every night under a roof of stars or in the storm, setting in motion their powerful vehicles for preparing ski slopes and reviving them into the right shape. The work of piste-basher drivers are strained by extreme and unpredictable weather conditions of the mountain and the loneliness they must deal with every night in the silence of their inner being. However the  impeccable final results lead to great satisfaction.

We hope that the first in our “World Cleaning” series has amazed, enriched or even pleasantly entertained you. Stay tuned for the next picture of the world that will take in distant continents and tell you about the traditions of the oldest cleaning traditions.

Berlin-based Johanna is a contributing blogger for Helpling. She loves travel, Google Doodles, and clean bathrooms.

At Helpling, we connect trusted cleaners with people who seek help with the housework. On our blog, we want to tell you more about the people behind our service: the cleaners, their happy customers and also to inspire you with ideas to make your home sparkle!'